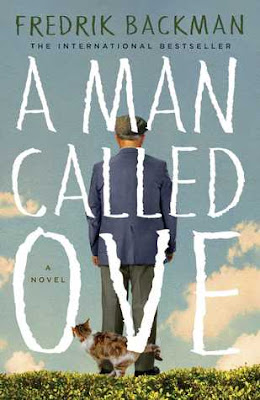 In this bestselling and delightfully quirky debut novel from Sweden, a grumpy yet loveable man finds his solitary world turned on its head when a boisterous young family moves in next door.

Meet Ove. He's a curmudgeon, the kind of man who points at people he dislikes as if they were burglars caught outside his bedroom window. He has staunch principles, strict routines, and a short fuse. People call him the bitter neighbor from hell, but must Ove be bitter just because he doesn't walk around with a smile plastered to his face all the time?

Behind the cranky exterior there is a story and a sadness. So when one November morning a chatty young couple with two chatty young daughters move in next door and accidentally flatten Ove's mailbox, it is the lead-in to a comical and heartwarming tale of unkempt cats, unexpected friendship, and the ancient art of backing up a U-Haul. All of which will change one cranky old man and a local residents' association to their very foundations.

A feel-good story in the spirit of The Unlikely Pilgrimage of Harold Fry and Major Pettigrew's Last Stand, Fredrik Backman's novel about the angry old man next door is a thoughtful and charming exploration of the profound impact one life has on countless others.

A Man Called Ove was selected by my library’s book discussion group over the summer. I couldn’t fit it into my schedule so I didn’t make the meeting which disappointed me because I would have loved discussing this witty novel with others. So I’ve given a copy to one of my best friends and I can’t wait to talk about with her.

Ove is the kind of man who’s interesting to read on paper but would be horrible to have as a neighbor. He’s an elderly man who’s stuck in his ways and has very strong opinions on the way things should be. Obviously, everything back in the day from work ethic to the way things were built were far superior back in the day. He’s lived in his subdivision with his wife for decades and has watched as their neighborhood and the world around them changed. He's helpless to adapt to these changes and defiant enough to plow through life doing things the way he sees fit.

There’s some very dry humor throughout the novel starting with his attempt to purchase an iPad and his exacerbation with the salespeople who can’t explain to him why it doesn’t come with a keyboard. That right there was the hook for me. Ove has a routine, much to the detriment of his neighbors, making sure that everyone is adhering to the rules. He’s not a man of many words so when a multi-cultural family of four moves in next door and invades his orderly world, he’s taken aback. He has no idea what to make of them yet somehow they’re constantly in each other's business. Suddenly, and much to his chagrin, he's inadvertently interacting with more of his neighbours. There is no reprieve as he realizes that he needs to be the one to straighten these folks out.

At the heart of the story is Ove’s dedication to his wife who has passed away. He’s lost without her around to help make sense of the modern world. This is where Backman got me. He was able to express eloquently what it’s like to be so madly in love with someone and find that other half of you. Ove's many memories of her are so achingly sweet that it’s impossible to not be affected by them. Perhaps my favourite line that perfectly describes his nature and his love for his wife in one fell swoop comes early on page 39:

“He was a man of black and white. And she was color. All the color he had.”

A Man Called Ove easily makes it to one of the spots on my top 10 books of the year. I took my time absorbing each page, watching as Ove gradually came out of his self-imposed solitary confinement. When I finally finished it, my eyes were all watery (which was rather inconvenient since I was at the library at that moment). It’s a beautiful and sentimental story, and I hope you make time to read it.

I was finally able to discuss this book briefly with my friend, Danielle and she loved it just as much as I did. Here's what she said: "It's one of those books I wish I could write. It's impressive when an author can take seemingly boring subject matter and make you love the characters enough to keep reading and soon realize that the storytelling is so well done." And THAT my friends is the magic of Ove!