Valor on the Move by Keira Andrews 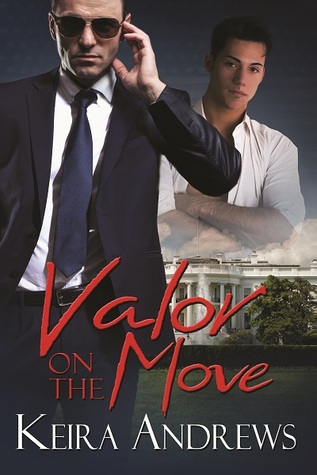 He’d give his life to protect the president’s son. But he never expected to risk his heart.
Growing up gay in the White House hasn’t been easy for Rafael Castillo. Codenamed “Valor” by the Secret Service, Rafa feels anything but brave as he hides in the closet and tries to stay below the radar in his last year of college. His father’s presidency is almost over, and he just needs to stick to his carefully crafted plan. Once his family’s out of the spotlight, he can be honest with his conservative parents about his sexuality and his dream of being a chef.
It’s definitely not part of Rafa’s plan to get a new Secret Service agent who’s a walking wet dream, but he’s made it this long keeping his desires to himself. Besides, it’s not like Shane Kendrick would even look at him twice if it wasn’t his job.
Shane’s worked his way up through the Secret Service ranks, and while protecting the president’s shy, boring son isn’t his dream White House assignment, it’s an easy enough task since no one pays Rafa much attention. He discovers there’s a vibrant young man beneath the timid public shell, and while he knows Rafa has a crush on him, he assures himself it’s harmless. Shane’s never had room for romance in his life, and he’d certainly never cross that line with a protectee. Keeping Rafa safe at any cost is Shane’s mission.
But as Rafa gets under his skin, will they both put their hearts on the line?

This ARC was received by the author and IndiGo Marketing and Design in exchange for an honest review.

Rafa Castillo is biding his time until his Republican father's presidential term is over.  When that happens he can finally come out and move to the other side of the world to pursue his dreams of becoming a chef.  Dreams that his mother has done the most to redirect into something SHE wants for him.  After his second to last semester of college, he returns to the White House for the summer.  Due to staffing changes within the Secret Service to provide protection to the new presidential candidates, Rafa is assigned two new agents in the rotating team that protects him 24/7.  The last thing he expected was to find one of his new agents to be a super hot guy a good 15-20 years older than him.

Shane Kendrick might have received the most boring detail within the White House, BUT it is a detail that could lead to protecting the President which has been his goal since joining the Secret Service.  Rafael Castillo (code name Valor) is an easy charge.  The most dangerous thing he does is cook  in the small private kitchen available to him.  When Rafa (or Valor - can't refer to his protectee in a personal way, now can he) begs Shane to sample the dishes he has been developing, Shane finds it hard to say no to someone so earnest and in need of a little encouragement.

Before long, Rafa's attraction to Shane has turned into a hard-core attraction.  And no matter how hard he tries to ignore it, Shane returns Rafa's interest.  But Shane is also dedicated to his job and refuses to jeopardize that.  At the first hint of physical contact, Shane shuts off all communication that isn't required in order to perform his duties as Valor's protector.

I was more than a little curious how this story would be portrayed.  I often enjoy May-December romances.  I find the evolution of the relationships to be fascinating and Valor on the Move was no exception.  I enjoyed how the development of their feelings was based on the slow realization of mutual interests rather than instant physical involvement.  Not that the physical attraction wasn't there from the onset.  It definitely was.  I also appreciated that Keira Andrews didn't try to gloss over the ethical issues of Shane becoming involved with the person he is paid to protect.   Nor does she sugar coat the likely response a Secret Service agent would have to his position being emotionally compromised.

My only complaint is that, as much I loved Rafa and Shane, I felt slightly removed from them as a couple.  There is a 6-month break towards the end of the story that I felt may have contained revelations for both characters.  Revelations that would have pulled me in a bit more and made me an even stronger supporter of their eventual happy ending.  But, I have to admit that my wanting more is a good thing since the author did such an amazing job of making me care about her heroes.

If you are a fan of age-gap romances with plenty of magic time and a feel-good ending,  I highly recommend this Valor on the Move.

Nat
Posted by bibliojunkies at 12:30 AM