Stay up all night with the sexy rockers in Stage Dive, the epic New Adult series from New York Times bestselling author Kylie Scott, author of Lick and Play.

As the lead singer of Stage Dive, Jimmy is used to getting whatever he wants, whenever he wants it, whether it's booze, drugs, or women. However, when a PR disaster serves as a wake-up call about his life and lands him in rehab, he finds himself with Lena, a new assistant to keep him out of trouble.

Lena's not willing to take any crap from the sexy rocker and is determined to keep their relationship completely professional, despite their sizzling chemistry. But when Jimmy pushes her too far and Lena leaves, he realizes that he may just have lost the best thing that ever happened to him. 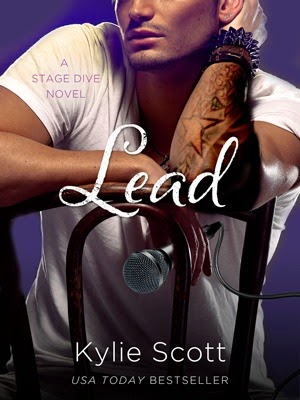 After ascending to hilarious highs in Play, it's time to get sober in Lead. Lena, who we met in the previous book, is hired to be Jimmy’s sobriety companion. Yes, the lead singer of the biggest band in the world needs a "babysitter" to make sure he doesn’t fall back into old addiction habits so that means being in close quarters with him at all hours, all day, every day.

Jimmy begrudgingly agrees to it. It’s not exactly what Lena had in mind either but since she’s still floundering after leaving home a year ago, she takes the job offer. As with the heroines in the previous two Stage Dive books, Lena is another strong female entering into the macho world of the Ferris brothers. She is so not intimidated by Jimmy at all. He can grunt his answers and be as anti-social as he wants to be but he doesn’t scare her off.

After a day that includes an emotional farewell and a particularly nasty and public encounter with another family member, Lena sees a whole new side to Jimmy that is otherwise kept very private. This is the Jimmy that is beyond reach.  And this is the Jimmy that she starts to have feelings for.  I have to say, Lena’s developing and inconvenient crush on him is adorable and funny.  Jimmy is so clueless that he doesn’t even pick up on it, at least not initially. However, anyone of us who has ever gone through that can recognize all the things that Lena is going through from the unintentional stares to the runaway thoughts turned fantasies. The boundaries start to get blurred and Lena knows that she’s falling for someone who is emotionally unavailable and incapable of the kind of intimacy that she wants. Let's not fail to remember that he is her boss too. Talk about complicated!

I appreciated that Lena is honest with herself.  She’s a big girl, she knows where this could lead and she’s prepared to deal with the consequences of her decisions, stupid as they could turn out to be. But she’s willing to take the risk to a certain extent. Jimmy on the other hand vacillates between wanting Lena to get her own life and wanting her to himself. Yes, there’s some jealousy and yes this big guy is in total denial about it. And when he suggests some utterly nonsensical ways for her to get over her crush on him (based on some silly magazine article) things naturally get heated up. People it’s hysterical and it’s made even more so because Jimmy is not only stubborn but also not very good with words. It still doesn’t stop Lena from mouthing off at him and falling deeper for him. As their relationship goes from professional to bizarre to hysterical to uneasy, he continues to be mostly grumpy and distant.


One thing I like about the Stage Dive series is that all the heroines that have been introduced so far are impressive, independent women. They’re unapologetic about who they are and they don’t dwell on what they may be lacking. It’s refreshing. When it comes to relationships, these women aren’t necessarily interested in changing the guys who come into their lives. If anything, these women bring out the better versions of these hard rocking, hard living guys. Lena is no exception. She’s a phenomenal foil to Jimmy’s moodiness. She cares for him deeply and her relentless encouragement of him to push past his barriers slowly chip away at his gruff demeanor. Lots of stuff broken, hearts included in the process but since when has love ever been easy?

Lead has solidified my author crush on Kylie Scott. I don't know how but she once again manages to create a mini-universe within the Stage Dive family. Lena and Jimmy have their own unique story to tell independent of the others but it's still about a tight-knit family. They all gather around when needed and of course, Mal, that dear sweet clown is there to deliver extra laughs.

And before I forget, I'd also like to thank whoever it is who's responsible for these freaking hot covers. Hot musicians and tattoos - an irresistible and dangerous combo! Look at these covers and discuss ... 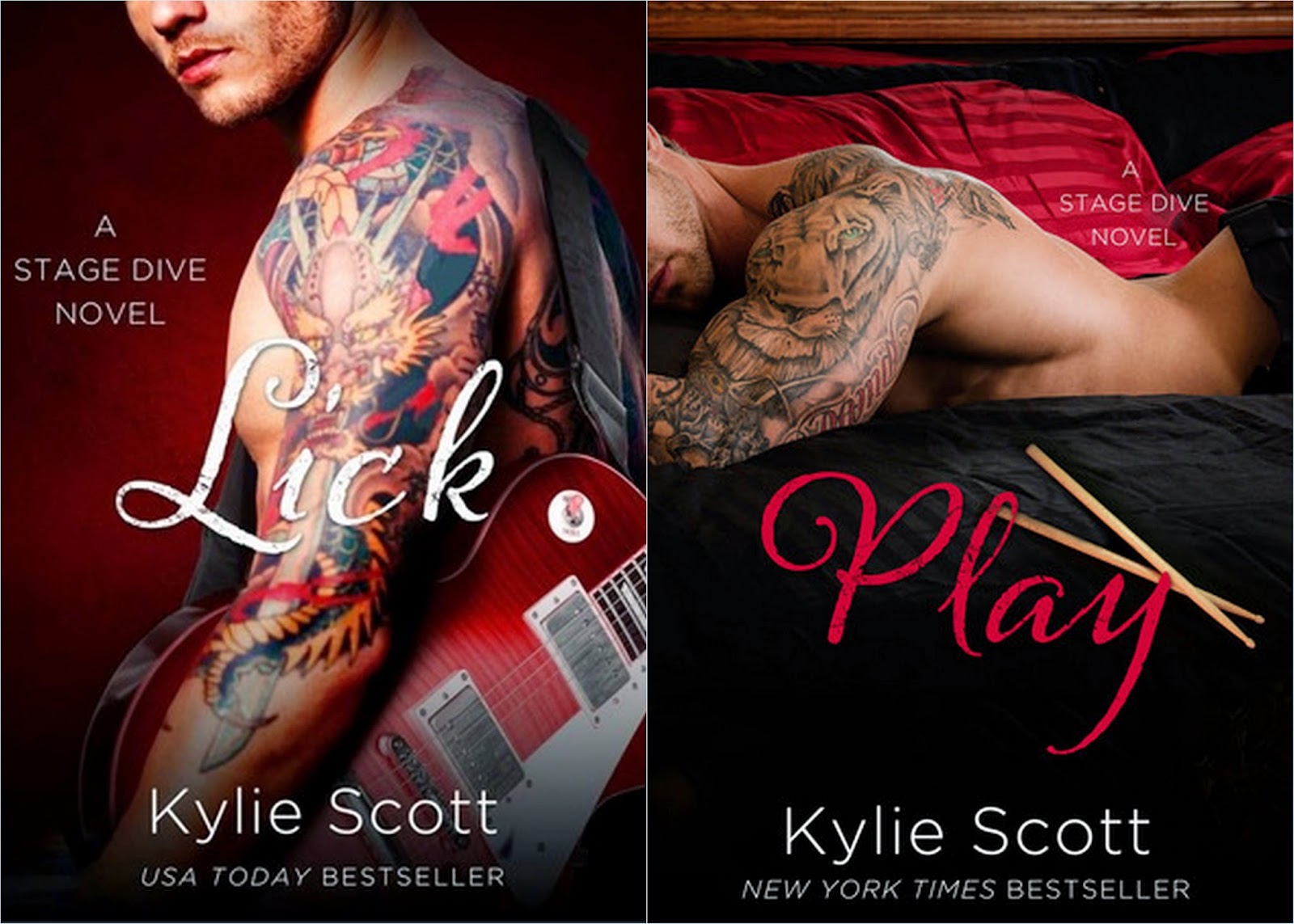 They're just lovely, aren't they? So if you're into broody lead singers who will rock your world and wicked sharp heroines who are their match, Lead is a sure bet! And now that we've met David, Mal and Jimmy, I CANNOT wait to find out Ben's story in Deep :-)

In the meantime, check out the a delicious excerpt from the book and learn more about the awesome Stage Dive series and the incredible Kylie Scott!

“You sure?” His brows became one dark cranky line. The scratches on his face were healing well, thank goodness. Though it didn’t reduce my desire to throttle his mother on a daily basis.

“And this is a surprise, how?” I slipped my hands into my back jean’s pockets. “Jimmy, you own more clothing than Cher, Brittney, and Elvis, put together. Things are bound to go missing.”

“Sure you haven’t seen it?”

“For goodness sake, what do you think, Jimmy? That I stole it to sleep in or something?” I laughed bitterly. Sure as hell, the truth deserved a good mocking. I’d sunk so despicably low.

I hadn’t even meant to steal the stupid thing, but the shirt had been mixed up with my laundry a few days ago. It’d been the first top I laid my hand on after stepping out of the shower, ready to go to bed. Without thought, I’d put it on and it’d been so soft, the scent of him lingering beneath the laundry detergent. Every night since, I’d found myself in it come bedtime. My shame knew no limits. And no, I still hadn’t quit. The words still hadn’t come even close to leaving my mouth.

“That I have some deep secret longing to feel close to you resulting in my stealing your shirt like some creepy perv?”

“Course I don’t fucking think that,” he replied crankily, reaching up to grip the top of the doorframe. All of his bulging muscles stretched the arms of his white T-shirt in the nicest way. It was all I could do not to start drooling, my heart beat taking up residence somewhere down between my thighs. And who could blame it? Not me. Maybe if I got laid, this would go away and things would return to normal. It’d seemed safer to avoid rubbing up against any men just in case I got carried away and started dating again. This new situation, however, changed everything.

“Well, of course not! That would be crazy.” And wasn’t that the god’s honest truth? Cray-zeee. Lock me up and throw away the key because it wasn’t like I didn’t know better.

“Just can’t figure out where the hell it could be.”

Angels couldn’t have smiled as innocently. They might have tried, but they would have failed, the dirty-mouthed, winged, little liars. “Jimmy, I don’t know where it is. But I’ll look around for it later, okay?”

“Yeah,” he said, and then added as an afterthought, “and stop looking at me weird.”

Kylie is a long time fan of romance, rock music, and B-grade horror films. Based in Queensland, Australia with her two children and one delightful husband, she reads, writes and never dithers around on the internet.


So here's that freaking awesome giveaway we promised... Go forth and enter avid readers! Good luck!

Posted by bibliojunkies at 12:15 AM