It's here, it's here!  We are super excited to participate in the Lonely Hearts Release Day Blitz!  Heidi Cullinan is an out of this world author and her Love Lessons series are simply amazing.  The latest installment delivers one of the more painfully honest New Adult stories I've read.  I can't recommend it enough.  Scroll down for an excerpt and review!

Even hot messes need a happily ever after.
With the quiet help of his wealthy family, Sebastian “Baz” Acker has successfully kept his painful past at bay. But as the end of college draws near, his friends—his buffer zone—are preparing to move on, while his own life is at a crippling standstill.With loneliness bearing down on him, Baz hooks up—then opens up—with Elijah Prince, the guy Baz took a bullet for last year. The aftershocks of their one-night stand leave giant cracks in Baz’s carefully constructed armor. For the first time, the prospect isn’t terrifying.
Accustomed to escaping his demons by withdrawing into his imagination, Elijah isn’t used to having a happy herd of friends. He’s even less comfortable as the object of a notorious playboy’s affections. Yet all signs seem to indicate this time happiness might be within his grasp. When Baz’s mother runs for a highly sought-after public office, the media hounds drag Baz’s and Elijah’s pasts into the light. In the blinding glare, Baz and Elijah face the ultimate test: discovering if they’re stronger together…or apart.
Warning: Contains sex in a Tesla, sex in a cupboard, sex under a piano, kinky role play, and a cappella RuPaul songs. Just a couple of boys groping, battling, then finally loving their way to becoming men.

“I don’t know. I think maybe this whole thing is a bad idea. I should stay, earn money.”
“Forget the money.” Elijah glared at him. “Easy for you to say.” A tic formed in Baz’s cheek. He shut the computer and glared right back, or ostensibly he did. Fucking sunglasses. He looked as if he wanted to say something but kept swallowing it.
Elijah gripped the mug so hard he thought he might break it. If he offers to pay me to be his date at the fundraiser, I’m throwing this coffee at his head.
Baz threw up his hands. “Fine. If you don’t want to go, say so.”
God, Elijah hated how this guy could tie him up inside. “I didn’t say I didn’t want to. I said I shouldn’t. I need to make money. Be responsible.”
“You have enough money in your fund for school. More than enough.” “
Yes, and my fund makes me want to throw up.”
“Why?”
“Because it’s at two hundred and fifty thousand dollars and still rising. Somebody, one person, put twenty-five thousand in just the other day. I could go to school twice with what’s in that account. I don’t understand where it all came from. Who all these people are. I owe all of them. I don’t know what I owe them. Just that I do and have no way to ever pay them back.”
“You don’t need to pay anybody back. You certainly don’t owe penance in the school cafeteria.”
“What the fuck would you know about it?”
He snorted. “Penance? I know plenty.”
Elijah clutched his coffee to his belly, sloshing some on his pajama pants. He stared at the floor, feeling angry, anxious and hollow. “I don’t want it. The money. The help. But I don’t have any choice. I have to take it. But I don’t know what to do with it.” Tears pricked his eyes, and he shut them. Tight.
When he heard the scrape of Baz’s chair, his stomach flipped over. He tried to drink his coffee, but his hand shook. Fuck, fuck, fuck.
Baz’s bare feet appeared in front of his own. Hands took the coffee cup away.
Elijah wrapped his arms around his belly and kept staring at the floor, except now he stared at Baz’s groin and feet. “You don’t understand.”
“The fuck I don’t. Ever since that goddamned night when I was sixteen, I’ve had bubble wrap around me. Yeah, I was a privileged rich kid, but after I was the tragic rich kid. My whole family and all my friends live to wipe my ass. Poor Sebastian. Don’t upset him. But don’t let him hurt himself. Don’t let anything happen. You want to talk about feeling like you owe somebody? Every goddamn day they all remind me I’m the boy who lived. Then they want to know why I can’t move on.”
Baz was so close each breath Elijah drew was Baz-scented. Night sweat and coffee and a whisper of morning breath, lingering detergent and old deodorant not cutting the mustard anymore. How fucked up was he? Baz was baring his soul, and all Elijah wanted to do was lick him.
When Baz put a hand on Elijah’s hip, Elijah had to grip the counter to keep from leaning into him. Talk. Stop being such a fucking mopey tool. “Why...why do you...” want me? “Why...me?”
On Elijah’s hip, Baz’s thumb made a slow circle. “I don’t know.” Slower circles. Like a massage. Four inches from Elijah’s groin. “I don’t know.”
Elijah dug his fingernails into the Formica. “You’re going to be a jerk again. And then we’ll be in the middle of the fucking desert or something.”
“No deserts in Illinois.”
“Fine. You’ll leave me in a cornfield.”
“You’re the only one who can drive. You can leave me in the cornfield.”
“Like I would.”
“You would, actually. I think... I think that might be why. Why...you.” 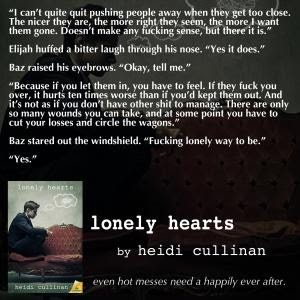 Baz and Elijah are acquaintances of sorts.  Granted that acquaintance is limited to the two times Baz has saved Elijah’s life and nothing in between. Their strange, distant and tenuous relationship erupts into a hot and sexy evening, the night of Walter and Kelly’s wedding.  Elijah gets that the night is a one off since neither he nor Baz do relationships.  But what he doesn’t understand is why Baz completely ignores him afterwards.  For a young man already dealing with severe abandonment issues, Baz’s brush off hurts.

Ever since Baz rescued a young teenage Elijah from a trick gone wrong, he’s been discreetly watching him and making sure he is ok.  To the extent of taking a bullet for him when Elijah’s dad loses his mind on campus.  The night they spend together during Walter and Kelly’s wedding was bound to happen but Baz doesn’t know how to handle the lingering emotions after the experience so he does what he does best and ignores Elijah.

When Baz’s mom decides to run for office, she insists he attend a function with a serious boyfriend in tow.  And if Baz doesn’t have one, she’ll hire one for him.  Regardless of his behavior, there is only one person he wants to have as a pretend boyfriend and that person is Elijah.  After some serious convincing, Elijah agrees.  Of course, they find that they both want more than a pretend relationship with the other.  As their relationship quickly grows to something neither were prepared before, they realize they each have to grow up in other ways as well.

As always, Heidi Cullinan introduces beautiful and realistic and slightly broken characters.  Elijah is recovering from a lifetime of dealing with his horrible bigoted and abusive parents.  After all he has been through and done, it is taking strength he never knew he had to help himself.  But with the help of all his friends (that he pretends he doesn’t want) and the school pastor who takes him so he has a safe haven, he finds that, just maybe, he can make it through life.  Baz has been “coasting” through college.   I only used that word because he has the wealth and privilege to draw out his college career.  But the reasons he has drawn it out have nothing to do with his financial situation and everything to do with the beating he endured as a teenager.  A beating that left him permanently disabled.

Regardless of their pain, neither of these characters are written in a way to manipulate the reader into feeling sorry for them.  They are who they are.  Yes, Baz will always have serious vision issues and constant pain (both things that seriously impact his career options) and Elijah will probably always deal with depression and PTSD.  But they never feel sorry for one another.  It’s more of a, “okay, you have some issues, so do I, let’s just work with it” sort of attitude.  It’s refreshing to see people with their type of baggage portrayed as people who just ARE.  Because that’s real life.  Life keeps happening and Elijah and Baz are going to figure out how to make it happen together.

Many of the secondary characters in this story are people we’ve met in Love Lessons and Fever Pitch.  They provide a wonderfully large positive support system to Elijah and Baz.  There are new characters too.  The one that stands out the most is Lewis/Leila.  The secondary story of her transition is both heartbreaking and heartwarming.  And I was thrilled to see that she will be getting her own story in this series.

I don’t often talk about triggers in stories but since this can sometimes be an issue for me, I thought I would mention it.  Both Elijah and Baz rely on alcohol and drugs to deal with their pain, depression and anxiety.  This isn’t a story about drug abuse but this is THEIR story and they do partake freely.  The author is shamelessly honest about this part of their lives.  Her portrayal of it and how they address it is informed, empathetic and beautifully sensitive.  I’m beginning to think there isn’t a subject that Heidi Cullinan can’t tackle with compassion and understanding.

I’ve been on a reading streak of great romances and Lonely Hearts is no exception.  If you are looking for a steamy, entertaining and thoughtful New Adult read then you should definitely pick up Lonely Hearts.  And if you haven’t read Love Lessons and Fever Pitch, I highly recommend those as well.

Proud to be from the first Midwestern state with full marriage equality, Heidi writes positive-outcome romances for LGBT characters struggling against insurmountable odds because she believes there’s no such thing as too much happy ever after. A member of Romance Writers of America since 1999, Heidi has served as president of Rainbow Romance Writers, run local chapter newsletters, and volunteered for committees on the national level. In addition to teaching writing since 1993, she also served as the writer’s workshop coordinator for GayRomLit Retreat for 2013. Find out more about Heidi at heidicullinan.com.