What You Left Behind by Jessica Verdi

* * * *
Scroll down for info about a fantastic giveaway! 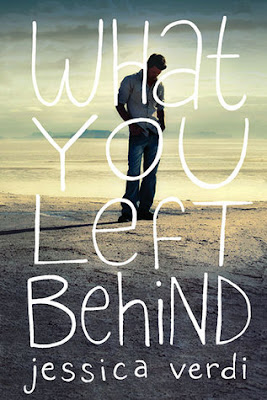 It’s all Ryden’s fault. If he hadn’t gotten Meg pregnant, she would have never stopped her chemo treatments and would still be alive. Instead, he’s failing fatherhood one dirty diaper at a time. And it’s not like he’s had time to grieve while struggling to care for their infant daughter, start his senior year, and earn the soccer scholarship he needs to go to college.

The one person who makes Ryden feel like his old self is Joni. She’s fun and energetic—and doesn’t know he has a baby. But the more time they spend together, the harder it becomes to keep his two worlds separate. Finding one of Meg’s journals only stirs up old emotions, and Ryden’s convinced Meg left other notebooks for him to find, some message to help his new life make sense. But how is he going to have a future if he can’t let go of the past?

Ryden is weighed down by so much guilt – getting his girlfriend pregnant, his girlfriend dying because of it, feeling inadequate as a father for his baby girl Hope, and not being able to keep up with school. He’s trying desperately to fulfill his responsibilities but this is also a seventeen year-old who has a lot of growing up to do.

Verdi gives a realistic portrayal of what life is like with a baby. His world is turned upside down and inside out. It’s hard enough on any new parent let alone a teenager with very limited resources. And the guy wants to do the right thing by his child. But he also wants time off to experience a bit of the life he’s had to give up in order to be a father. Much of the story focuses on his struggle to figure out what a father should be. He grew up without one and he wonders how much of that factors into his ability to be a good dad to Hope. He also wants to pursue his love of soccer with the intention of getting a full ride to college. A full ride means a stellar education and the promise of a more secure future for him and his child. But the demands of that commitment to the team add more pressure to his already tight schedule. At many intervals he was rather naïve about what he could accomplish considering his circumstances. Yet, I didn't want to see his hopes dashed.

Ryden’s frantic search for Meg’s journals become his obsession. He’s convinced that reading them will give him answers, a stronger connection to Meg and her thoughts. He doesn’t bank on them giving him more questions. He's also blindsided by his growing feelings for his co-worker, Joni who takes his mind off of his chaotic life. It’s a reprieve when he’s with her because he can temporarily suspend this other part of his life and just be. It’s a jerk move but the guy is confused and overwhelmed by life in general so he’s not exactly making the wisest of decisions.

With sincerity and honesty, Verdi gives us a heartbroken single teen dad trying to adjust to life with his child. He's doing his best to make ends meet and to learn what it means to be a parent with the help of his resilient mother and two other friends who knew Meg well. Understanding where all the pieces of himself and Meg fit take an emotional toll on him. But part of growing up and maturing is understanding what can be fixed, what needs to be let go of and when to ask for help. There's hope for Ryden yet, and this guy who wants to be everything for his daughter, is a hero.

Enter the giveaway for your chance to win one of three signed copies of What You Left Behind and three signed bookmarks courtesy of Sourcebooks Fire! You can also read the first chapter.
Posted by bibliojunkies at 12:00 AM