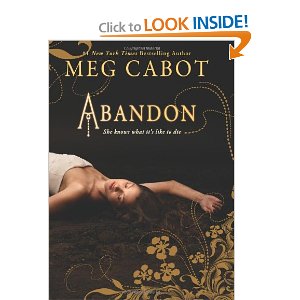 Pierce Oliviera died.  No really, she drown in her family's pool while trying to save a bird.  While in the Underworld she runs into John, a young man she met when she was 7 years old in the cemetery after her grandfather's funeral.  She rushes to John hoping he can help her, as he did when she was young and gets much more than she bargained for.  Scared and confused, Pierce escapes the Underworld.  Abandon takes place a year and a half after Pierce died.  In a series of flashbacks, Pierce tells us how she came to be on Isla Huesos﻿ (an island off the coast of Florida where her mother grew up & her mother's family still lives).  Pierce is trying to come to terms with her death, her new life, the terrible things that seem to follow her now and John's involvement in these terrible things.
Abandon brings together two things I adore, Meg Cabot and Greek mythology.  I have read nearly all of Meg Cabot's books. I even met her with Maggie Stiefvater and Libba Bray at a recent This Is Teen event (my copy of Size 12 is Not Fat now sports her autograph!).  I equate Ms. Cabot with the quirky, funny, pop culture worshiping books like the Heather Wells Series, The Boy Series, or the Princess Diaries.  Abandon has a much different tone and voice than Ms. Cabot's other works.  In fact, the book was much darker than I was expecting and I was mesmerized.  Telling the story in flashbacks kept me constantly guessing what had happened to bring Pierce to this place in life and where the story would go.
This is a unique perspective on the story of Hades & Persephone.  The Furies got a whole new purpose and identity.  I had a little problem with Pierce's anger towards John in the beginning of the book as it seemed a little disproportionate to his "crimes", but as Nat and Bel always tell me, she is a teenager, so that was easy to get over to enjoy the book.  Of course, Abandon is the first in a trilogy; therefore, the ending left me feeling... unfinished.  And so begins the torture of waiting until next summer for the next installment - - Why must you torture me so Meg, why?!  I might forgive you for this punishment if you announce a (hopefully soon) release date for Heather Wells Book 4!
~ Shel
A retelling of the myth of Hades and Persephone.
Posted by bibliojunkies at 9:14 PM