BiblioJunkies is thrilled to be part of the Broken Cover Reveal Blog Tour. Broken is the latest release from CJ Lyons and will be available through Sourcebooks Fire this November. 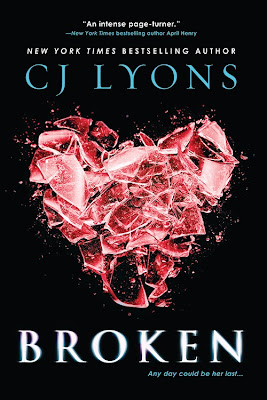 For Scarlet Killian, every day is a game of Russian roulette—she has a 1 in 5 chance of dying…

New York Times bestselling author CJ Lyons makes her YA debut with a fast-paced thriller sure to keep readers guessing to the very last page.

Fifteen-year-old Scarlet Killian has one chance for a normal life. Only problem? It just might kill her. Diagnosed with a rare and untreatable heart condition, Scarlet has never taken the school bus. Or giggled with friends during lunch. Or spied on a crush out of the corner of her eye. Scarlet has come to terms with the fact that despite the best efforts of her doctors and parents, she's going to die. Literally of a broken heart.  So when her parents offer her a week to prove she can survive high school, Scarlet knows her time is now... or never.

Scarlet can feel her heart beating out of control with every slammed locker and every sideways glance in the hallway. But for the first time in her life she makes real friends. She also makes new discoveries about the truth behind her illness... a truth that might just kill her before her heart does.

CJ: Yes. As a pediatrician I diagnosed my niece with Long QT Syndrome when she was born. Her heart specialists believe she's the youngest person in the world diagnosed with Long QT. She's had to take medicine every day of her life and can't ever skip a day. So far that's added up to over ten thousand pills taken.

You know that feeling you get when you've run as hard and fast as you can and you stop but your heart keeps galloping along? And you wonder for a second if maybe it's not going to stop, but will keep galloping out of control? But then of course it settles back down. For people with Long QT, their heart doesn't change gears well, going from regular to galloping and back again. So they have to avoid anything that would make their heart race.

No sports or aerobic exercise. No horror films. No roller coaster rides. No jumping into cold water on a hot summer's day.

But that doesn't have to stop someone with Long QT like my niece from having a great life. Today she is a brilliant, active fourteen-year-old who gets straight A's, enjoys riding horses, archery, reading, breeding Rottweilers, and who wants to grow up to be either a fashion designer or President of the United States. Her main fashion accessory is her portable defibrillator, Phil, who goes with her everywhere, including camping, to the beach, and recently to her first Broadway show.

BROKEN is dedicated to her fearless approach to life where outwitting Death is simply part of her daily routine.

CJ: Definitely nothing like Grey's Anatomy, but the first few seasons of ER get it right. Working in the ER is basically about learning how to control (and live with) chaos, the art of listening, and how to quickly decide what's the most important thing you need to tackle next.

I worked three jobs to put myself through medical school and one of them was waitressing at a very busy family restaurant. Honestly, that was the best preparation I ever could have had for life in the ER.

Q: Why did you leave medicine to write books?

CJ: I've been a storyteller all my life—a fact that used to get me placed in time-out a lot as a kid. But writing stories has always been my way of making sense of the chaos that goes on in the world around us. I wrote my first novel in college and wrote two more science fiction novels in medical school.

Then, while I was an intern at Children's Hospital of Pittsburgh, one of my close friends was murdered. Dealing with that grief and trauma while still working seventy hours a week and trying to save lives—I wasn't prepared for that. So I turned to my writing and that's when I wrote my first thriller. I never thought about actually making a career of it until years later when friends who were published authors encouraged me to enter a national writing contest and I was a finalist. This led to several publishing contracts and I realized that as much as I loved being a doctor, here was a chance for a second dream come true: being a full time writer.

It was a huge leap of faith leaving my job (and my patients—I missed them, a lot!) but I've always believed that if you're going to dream, you should dream big, so I went for it. Since then I've published twenty books, hit #2 on the New York Times bestseller list, won awards for my writing, and most importantly, have had the chance to impact millions of people through my novels. Talk about a dream come true!

Q: What's your best advice for someone who wants to be a writer?

CJ: Never surrender, never give up. Writing is hard work, it takes years to master the craft, so you need to stick with it. And read, read, read…pay attention to what makes the books you like work as well as why the books you don't like fail. You never stop learning in this job, but that's also what makes it so much fun.

A New York Times and USA Today bestselling author of sixteen novels, former pediatric ER doctor CJ Lyons has lived the life she writes about in her cutting edge thrillers with heart. CJ has been called a "master within the genre" (Pittsburgh Magazine), and her work has been praised as "breathtakingly fast-paced" and "riveting" (Publishers Weekly) with "characters with beating hearts and three dimensions" (Newsday). The author of thrillers such as the Lucy Guardino FBI series, she has sold over 1 million books in the last year.

When not writing, she can be found walking the beaches near her South Carolina Lowcountry home in Columbia, SC, listening to the voices in her head and plotting new and devious ways to create mayhem for her characters. To learn more about her Thrillers with Heart go to www.CJLyons.net.