Jill Shalvis is with us today to share FIVE FUN FACTS for It Had To Be You as well as an excerpt. These fun facts are absolutely hilarious and SO Jill!  And once you are done reading,  fill out the form below to WIN a copy of It Had To Be You!

1. The idea for hot, tired, and grumpy detective Luke Hanover to walk into his house and find a half naked woman talking to herself might be very slightly autobiographical.  I don’t want to talk about it…

2. I consumed twelve boxes of Mother Double Fudge cookies in the writing of this book and gained five pounds.  I don’t want to talk about that either...

3. Ali’s name was originally going to be Samantha.  Her nickname would have been Sam, but we chose to change her name so the sex scenes wouldn’t be between Sam and Luke!

4. Every morning when I would wake up the muse and go to write on this book, all my characters wanted to do was jump into the sack.  Naughty characters.

5. I’ve never had so much fun with a hero as I did putting Luke in those sexy board shorts and on a paddle board. 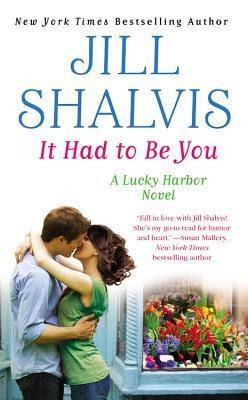 A rough sound escaped him, and he tightened his grip.  “It’s okay, Ali.  I’ve got you.”

Thank God.  For just this one second, someone had her.  She didn’t have to be strong all on her own.  She exhaled a long, shaky breath and concentrated on dragging more air in.  After a few beats, she realized he smelled amazing, guy amazing, and that her lips were pressed against his throat.  Suddenly it wasn’t just comfort she was feeling, but a whole boatload of other things too, with arousal leading the pack.  Extremely aware of the big, warm hand moving up and down on her back, she wondered – did he feel it too?

And then she had a bigger problem.  Her face was still pressed up against his warm skin and – look at that -- every time she moved, her mouth slid over him.

He hadn’t shaved that morning, probably not yesterday either, and his skin was rough with stubble.  Deliciously rough.  And then there was his scent …  Yum.  She could no more have stopped herself from doing it again as she could have stopped breathing.

In reaction, Luke let out a low, very male sound that called to the most female part of her.

Which answered her question.  Yeah, he felt it too.

Email ThisBlogThis!Share to TwitterShare to FacebookShare to Pinterest
Labels: Forever Romance, Grand Central Publishing, It Had To Be You, Jill Shalvis