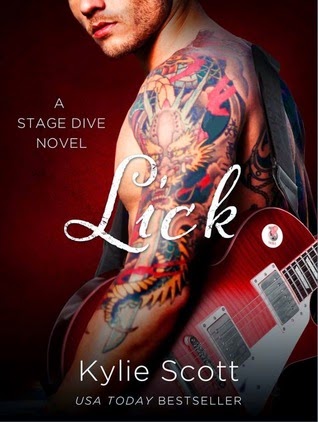 Waking up in Vegas was never meant to be like this.

Evelyn Thomas’s plans for celebrating her twenty-first birthday in Las Vegas were big. Huge. But she sure as hell never meant to wake up on the bathroom floor with a hangover to rival the black plague, a very attractive half-naked tattooed man, and a diamond on her finger large enough to scare King Kong. Now if she could just remember how it all happened.

One thing is for certain, being married to rock and roll’s favorite son is sure to be a wild ride.

I have a thing or a type – bad boys with dark hair, tattoos, brilliant taste in music, fast cars and motorcycles. The tattoo thing is a recent development. So when I happened upon Lick and saw the rather stunning cover, well let’s just say that I got slightly giddy and tore through the entire book within a day. (And seriously, how could I even pass up a book with a title like that?) To say I’m completely enamored with it is an understatement.

When an utterly confused and hung over Evelyn wakes up to find out that she has somehow married a guy she barely knows, her life is turned upside down and inside out.  And in her less than stellar state she doesn’t recognize that she’s married to none other than David Ferris, rock god, songwriter and guitarist for the hottest band on the planet, Stage Dive. It's a rocky start to the nuptials when within the first few pages she wakes up married, pukes, requests a divorce and then pukes some more when she discovers that she’s got some ink too in a rather embarrassing spot. Yep, I was hooked.

The fun really begins when Ev goes out to LA to meet with David’s lawyers to hammer out details of the divorce/annulment. She gets a quick introduction to his crazy lifestyle and even crazier cohorts. When things get hairy with the paparazzi they escape to his beach house where they agree to take the weekend get to know each other. David encourages her to remember the night they met and what ensued before they tied the knot. The more they feel around each other, the more complicated it gets. Yet it just feels so inexplicably right.

While some details may seem a little out there, they don’t take away from how enjoyable this story is. I like Ev and David equally. The sparks fly constantly between them and they're so darn good together. They manage to annoy and intrigue each other. It’s obvious that even if she was a drunken mess when they met that something important happened between them.  And then there's the fact that they're going about their relationship in reverse which makes things even more perplexing and uneasy. There are hurdles in their way such as their past, trust issues and what their personal plans for the future are. But David attempts to put Ev's mind at ease when he talks about some new songs he's written since they've been together:

"They're love songs, baby.  Love isn't always smooth or straightforward. It can be messy and painful. Doesn't mean it isn't the most incredible thing that can ever happen to you. Doesn't mean I'm not crazy about you."

Suffice it to say that each of them has had their eyes opened as a result of this. Both of them surprised me in their own way with the direction they go in.

Lick is fun and sexy! David and Ev's intimate moments are a thrilling mix of tender and hot! And it also boasts some very funny exchanges courtesy of Mal, who’s the band's drummer. I swear I couldn't bear to put it down. I'm loving this book so much that I’m reading it again already. And Ms. Scott, how soon can we expect the next installment?

Thank you to NetGalley and Momentum Books for the opportunity to review this title.