The Coincidence Of Callie And Kayden by Jessica Sorensen 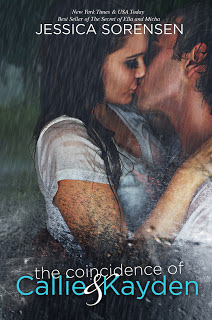 Luck was not on Callie’s side the day of her twelfth birthday when everything was stolen from her. After it’s all over, she locks up her feelings and vows never to tell anyone what happened. Six years later her painful past consumes her life and most days it’s a struggle just to breathe.

For as long as Kayden can remember, suffering in silence was the only way to survive life. As long as he did what he was told, everything was okay. One night, after making a terrible mistake, it seems like his life might be over. Luck was on his side, though, when Callie coincidentally is in the right place at the right time and saves him.

Now he can’t stop thinking about the girl he saw at school, but never really knew. When he ends up at the same college as Callie, he does everything he can to try to get to know her. But Callie is reserved and closed off. The more he tries to be part of her life, the more he realizes Callie might need to be saved.


Since The Redemption of Callie and Kayden is due out shortly, I thought it would be nice to remember why this series is just another winner from Jessica Sorensen. Her stories are incredibly appealing and she manages to create some memorable characters in her books. The Coincidence of Callie and Kayden is another emotionally charged story, this time about two people who are so damaged that neither feels worthy of happiness or love.

I love how Sorensen sets us up with both Callie’s and Kayden’s point of views. It’s very much the same as with The Secret of Ella and Micha, a formula that works but one she tweaks in this book.  Unlike Ella and Micha, Callie and Kayden do not have an established history together or any sexual tension from the beginning. This time the full on ugly is displayed out in the open with both of them dealing with a lot of pain. For the first time in his life, Kayden wants to feel rather than go through the motions. His seemingly perfect life is far from that. Callie walked in on one of the worst moments of his life and rescued him without hesitation. He can never thank her enough for what she did. And because she did so, he has become curious about her. Who exactly is this quiet girl, known as a “freak” in high school who came to his aid and just disappeared.

For her part, Callie was surprised by what she did for Kayden. After  having witnessed what she did, she realizes that not everyone has a charmed life. She goes off to college a few days after the incident to focus on starting her new life and new identity away from the horror of her childhood and high school. Her past catches up with her when Kayden shows up at her college. With her new friend Seth, she learns to slowly open up and relinquish control so that she can have some normal experiences. It’s hard for her to trust anyone but she’s drawn to Kayden. After seeing him at his worst, she recognizes someone who is as anguished as she is. They’ve both been failed by their families. And as hard as it is to admit the secret that’s haunting them, they also find a strange kind of comfort in their growing friendship. Interestingly both sides wonder how wise it is to pursue their attraction to each other when they’re messed up themselves.

As gutting as some moments were, everything about this book is heartfelt and authentic.  Sorensen deftly handles two very sensitive issues with empathy and intelligence. Reading how Callie and Kayden wade through their emotional turmoil is hard.  I mean, they both need hugs! Neither of their issues are easy and no one has the right answer. But it’s beautiful to see these two people develop a genuine friendship where they become each other’s staunchest supporter. Kayden himself admits that he feels real and truly happy for the first time in his life. Callie is learning to trust and see that not everyone will hurt her. She takes big steps towards having happiness.

I love this book. I’m impressed with how it’s written, how Sorensen has managed to inject so much heart into it. She has given me a new couple to root for. I tell you what though – I am slightly mad at her for leaving me with a hell of an ending. It was so disturbing and intense I don’t think I was able to breathe until it was all said and done. Now I’m desperately waiting for the sequel so I can put my mind at ease.