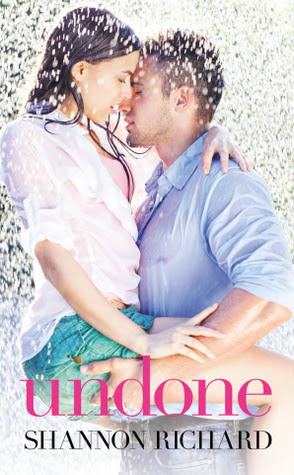 Why wearing red shoes makes a girl a harlot
Why a shop would ever sell something called "buck urine"
Why everywhere she goes, she runs into sexy-and infuriating-Brendan King

After losing her job, her apartment, and her boyfriend, Paige has no choice but to leave Philadelphia and move in with her retired parents. For an artsy outsider like Paige, finding her place in the tightly knit town isn't easy-until she meets Brendan, the hot mechanic who's interested in much more than Paige's car. In no time at all, Brendan helps Paige find a new job, new friends, and a happiness she wasn't sure she'd ever feel again. With Brendan by her side, Paige finally feels like she can call Mirabelle home. But when a new bombshell drops, will the couple survive, or will their love come undone?

Paige Morrison moves back in with her parents after losing her job, apartment and boyfriend in the short span of two months.  And as if moving back in with your parents after being successfully independent isn’t bad enough, she is now stuck in a small Florida town that has quickly decided she is trouble and should just move away.  After yet another horrendous interview where the local business owner has no real intent on hiring her, Paige’s car breaks down on the side of the road.  There she is rescued by auto shop owner Brendan King.

Brendan King has been fascinated by the very tall and attractive Paige Morrison ever since she moved to town.  When he finally meets her he is even more amused by her carefree colorful style and her smart mouth.  Attraction and amusement quickly give way to more and now Brendan has to find a way to make sure she stays in a small town where half the population is nosy and mean.

There are only three words to describe this romance - cute, sweet and sexy.  Paige is wonderfully fun and sassy.  I was drawn to her right away.  Her sarcastic responses to some of the horrendously rude people of Mirabelle were so fantastic that I almost I have an opportunity to steal and use them one day.  And Brendan…yum.  His laid back attitude was quite attractive.  And the fact that he jumped in head first once he realized how much he loved Paige?  Wow.  He didn’t even look back.  He knew what he wanted and he went after it with such confidence and carefulness that I may have swooned a little bit.

This is a fun and sometimes moving story about two people navigating the many different stages of a relationship.  If you love romance and are looking for a sweet and fun read, Undone is for you.

Nat
Posted by bibliojunkies at 12:00 PM